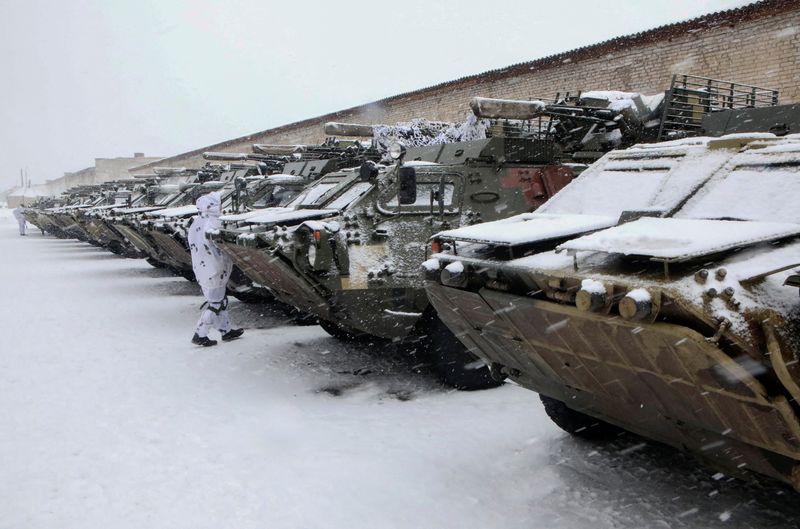 WASHINGTON/LONDON/MOSCOW (Reuters) – The United States and the United Kingdom are prepared to punish Russian elites close to President Vladimir Putin with asset freezes and travel bans if Russia sends troops into Ukraine, the White House and British government said on Monday.

Britain urged Putin to “step back from the brink” after the Russian buildup of troops near Ukraine stoked fears of war, and warned any incursion would trigger sanctions against companies and people close to the Kremlin.

“The individuals we have identified are in or near the inner circles of the Kremlin and play a role in government decision making or are at a minimum complicit in the Kremlin’s destabilizing behavior,” White House spokesperson Jen Psaki told reporters.

British Foreign Secretary Liz Truss said planned legislation will give London new powers to target companies linked to the Russian state. Neither government revealed who was in their sights for sanctions.

“An attack by a given country on Russian business implies retaliatory measures, and these measures will be formulated based on our interests if necessary,” Peskov said.

Since the fall of the Soviet Union in 1991, London has become the haven of choice for a river of money from Russia and other former Soviet republics. Transparency advocates have long called on Britain to be tougher about illicit financial flows.

British Prime Minister Boris Johnson was due to speak to Putin by telephone late on Monday or early Tuesday and travel to Ukraine on Tuesday.

At a meeting of the U.N. Security Council on Monday, requested by Washington, Russia’s U.N ambassador said the West’s assertion that it had amassed 100,000 troops near Ukraine had not been confirmed by the international body and there was no proof it was planning military action.

He said U.S. talk of war was “provocative,” that Russia frequently deployed troops in its own territory, and that Ukraine’s crisis was a domestic issue.

China’s ambassador to the United Nations said China did not view Russia’s troops near the border as a threat and urged all parties to not aggravate the situation.

Opponents of Putin have long urged the West to clamp down on Russian money, though oligarchs and Russian officials continue to flaunt wealth at Europe’s most luxurious destinations.

“Putin’s cronies will no longer be able to use their spouses or other family members as proxies to evade sanctions. Sanctions would cut them off from the international financial system and ensure that they and their family members will no longer able to enjoy the perks of parking their money in the West and attending elite Western universities,” said a senior Biden administration official, speaking on condition of anonymity.

Britain has already imposed sanctions on about 180 people and 48 entities since Russia annexed Crimea, including six people it says are close to Putin. The sanctions allow Britain to bar individuals from entering and to freeze their assets.

Still, Britain has in the past taken a softer line on Russia’s business elite than the United States – for instance sparing Igor Sechin, one of Russia’s most powerful men as CEO of oil producer Rosneft, whom Washington sanctioned in 2014.

The European Union, many of whose members are in NATO, has also threatened “strong political consequences and massive economic costs” for Russia over any new incursion into Ukraine.

Some NATO countries, including the United States and Britain, have sent arms to Ukraine, although they have ruled out sending troops there to fight.

Poland said it had offered neighboring Ukraine tens of thousands of munitions, and was awaiting a reply. The White House on Monday accused Russia of surging troops into Belarus, which is hosting Russian drills and borders both Poland and Ukraine.

Europe’s dependence on Russian energy supplies weakens the West’s hand. A top EU official said the future of a key gas pipeline from Russia was on pause.

The United States has asked top gas producer Qatar and other major exporters to study whether they can supply more to Europe.