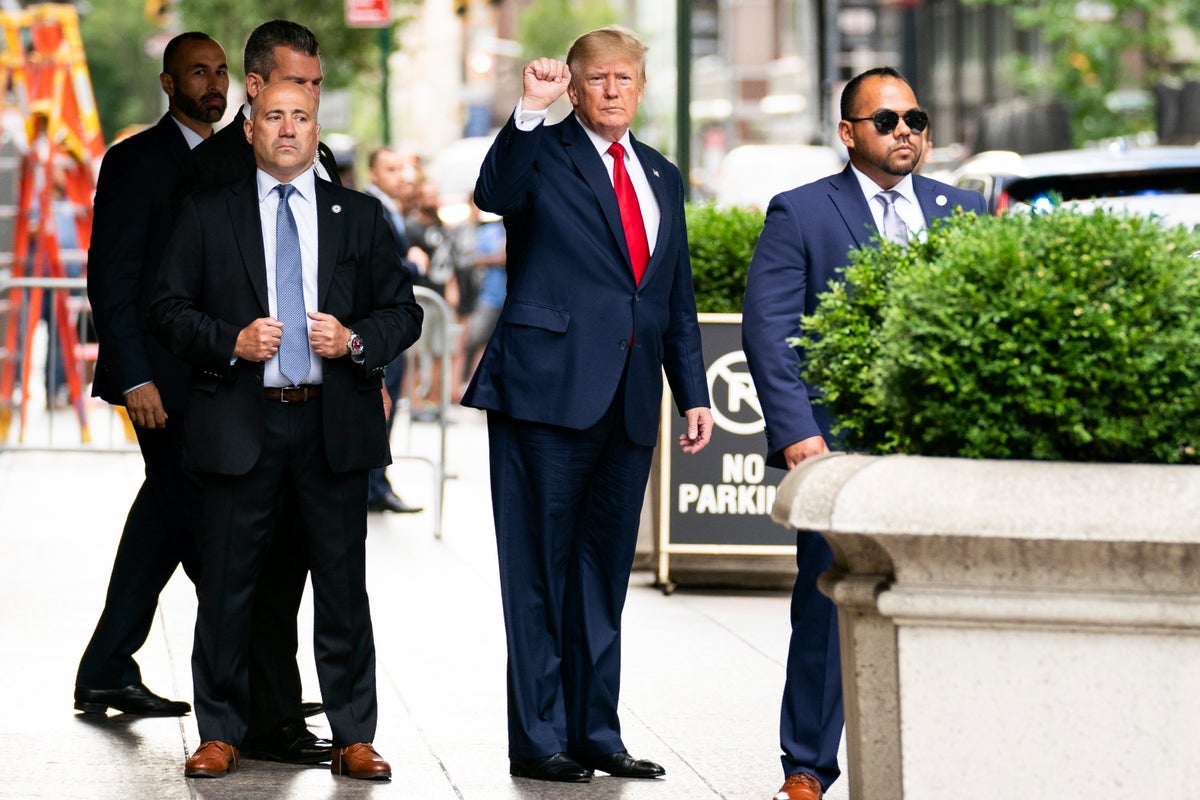 “I’m always concerned about threats to law enforcement,” Mr Wray said. “Violence against law enforcement is not the answer, no matter who you’re upset with.”

As the fallout from the FBI’s raid on Mar-a-Lago continues with rumours of a Trumpworld informant tipping off authorities, Mr Trump pleaded the fifth amendment in his sworn deposition to the long-running New York State probe into his real estate dealings.

Mr Trump has repeatedly condemned the probe as a politically motivated “witch hunt”. His children Ivanka and Donald Jr both recently gave depositions in the civil investigation after months fighting against subpoenas for their testimony.

Meanwhile, reports have revealed that before its raid on Monday, the FBI had already obtained surveillance tapes from Mar-a-Lago via a subpoena to the Trump Organization. The former president has made likely false claims about agents planting evidence at his home.

“I’m always concerned about threats to law enforcement,” Mr Wray said. “Violence against law enforcement is not the answer, no matter who you’re upset with.”

Mr Wray spoke on Wednesday afternoon for the first time about the FBI’s search of former president Donald Trump’s Mar-a-Lago residence – though he declined to go into details.

“As I’m sure you can appreciate, that’s not something I can talk about,” Mr Wray told reporters in Omaha, Nebraska.

Comedian and activist Jon Stewart received a standing ovation as President Joe Biden signed into law the PACT Act, which will provide life-saving care to veterans who have been exposed to burn pits.

Mr Biden personally thanked Mr Stewart for his advocacy on the issue during Wednesday’s White House signing, saying: “What you have done, Jon, matters, and you know it does. You should know it really, really matters.

‘What you have done, Jon, matters,’ Biden tells Stewart

An insider with knowledge of what government records former president Donald Trump still possessed more than 18 months after he left the White House reportedly tipped off FBI officials to a cache of classified documents at the ex-president’s Palm Beach, Florida home and office.

According to Newsweek, two “senior government officials” have said the Monday search of Mr Trump’s rooms at Mar-a-Lago — the mansion turned private club where he spends most of his year — came after a confidential FBI source provided agents with information on “what classified documents [Mr Trump] was still hiding and … the location of those documents”.

The officials also said the search of the ex-president’s property was based on concerns that Mr Trump was unlawfully holding on to classified national defence information.

Fox News has not been enamoured of the FBI’s raid on Donald Trump’s Mar-a-Lago residence as the former president’s legal troubles rapidly mount.

Fox News hosts and other leading figures in the Republican Party and conservative movement have decried the FBI’s raid on Mr Trump’s residence as an politically motivated overreach of government power. But as a Daily Show video juxtaposing Fox News commentary on the FBI investigation of the Hillary Clinton’s email scandal with footage of Mr Trump shows, the network’s hosts have not always been so opposed to FBI intervention.

Bevan Hurley spoke to reporter Peter Schorsch on how he broke the biggest political story of the summer.

President Joe Biden left Washington on Wednesday to begin what is expected to be at least a seven-day vacation in South Carolina with members of his family.

Biden, accompanied by first lady Jill Biden, departed the White House by motorcade to Joint Base Andrews outside the capital, where Air Force One was on hand to take them to Charleston. The first couple was planning to be in Kiawah Island, noted for its private beach and golf resort, through Tuesday, according to Federal Aviation Administration advisories.

A conservative activist and convicted participant in the attack on the US Capitol is lashing out at liberals after receiving widespread mockery for his portrayal of the supposed suffering of his comrades at a right-wing gathering over the weekend.

Brandon Straka claimed in a tweet on Monday that elements of the media were trying to have him prosecuted after he appeared at the Conservative Political Action Conference in Dallas over the weekend where he participated in a bizarre piece of performance art portraying himself as an imprisoned January 6 rioter.

John Bowden has the story.

Former president Donald Trump has accused FBI agents of “planting” evidence during their search of his Mar-a-Lago residence, alleging that federal authorities would not let his legal team observe the activity.

“The FBI and others from the Federal Government would not let anyone, including my lawyers, be anywhere near the areas that were rummaged and otherwise looked at during the raid on Mar-a-Lago. Everyone was asked to leave the premises, they wanted to be left alone, without any witnesses to see what they were doing, taking or, hoopefully not, ‘planting.’ Why did they STRONGLY insist on having nobody watching them, everybody out? Obama and clinton were never ‘raided,’ despite big disputes!” Mr Trump said on his Truth Social platform.

President Joe Biden has signed into law the PACT Act, which will provide life-saving care to veterans who have been exposed to burn pits.

In remarks at the White House, Mr Biden called it the “most significant law our nation has ever passed to help veterans who were exposed to toxic substances” and said: “I was gonna get this done come hell or higher water.”

Trump’s past comments on criminals pleading the Fifth resurface

Donald Trump and his allies are once again facing the consequences of their past actions after the former president announced that he would take the Fifth Amendment and refuse to testify when faced with the prospect of giving a deposition in his fraud case.