The patriarch and the pope


In the early 1940s, at the height of of the Second World War, Pope Pius XII, who had practically nothing to say about the Holocaust taking place at the time, delivered several impassioned sermons on the subject of human dignity. Today as Moscow continues its attacks on Ukraine, Russia’s Patriarch Kirill not only refuses to denounce the war but has also openly justified his country’s aggression. It is intriguing that, like the wartime Pope, Kirill too has contributed to a human rights discourse centred around the notion of dignity.

The talk about dignity coming from spiritual leaders, who care little about the dignity and suffering of victims of genocide or war, is not simply a matter of hypocrisy. It is, in fact, very consistent with a certain, illiberal elaboration of the concept of dignity. So, however different the two situations are – the 1940s and now – what they share in common is an understanding of the dignity of man, which under the disguise of the language of Enlightenment philosophy, promotes a deeply conservative, illiberal project. In both cases, the concept of human dignity articulated is explicitly and intentionally used as a tool against liberal political philosophies – that of the French Revolution during the Second World War and that of ‘the collective, liberal West’ (to use a common trope of the pro-Kremlin Russian media) in our day. Indeed, the position of the Russian Orthodox Church now bears strong comparison to Catholic thinking from the years before the end of the Second World War. The current tendency to delve into Russian literature and culture for elucidation of some of the rhetoric coming from the Kremlin and the Moscow Patriarchate has obscured what is basically a common theme among the Christian right, both in the West and in Russia.

In his book Christian Human Rights (2015), Samuel Moyn has proposed that the human right discourse of the first two decades following the Second World War was the invention of Catholic thinkers in the late 1930s and 1940s. Human rights, he argues, was therefore a project of the Christian right rather than the secular left. The secular, liberal vocabulary of the French Revolution, to which the notion of ‘rights’ belongs, was appropriated and Christianized in ways that promoted religious and conservative values. The emphasis, in this Christianized version of human rights, fell not on individual emancipation, but on ‘policing the borders and boundaries on which threatening enemies loom’.

Not surprisingly, Moyn’s thesis has provoked disagreements on various grounds. There are, for example, other versions of Christian human rights, which derive not from the right, but from the left and are informed by various forms of Christian humanism. The larger debate is beyond the scope of this analysis. What is thought-provoking is an observation Moyn makes on two sermons given by Pope Pius XII on Christmas Eve, in 1942 and in 1944. In these addresses, the Pope emphasized the link between dignity and rights and, more specifically, interpreted dignity as a foundation for rights. There is a long history to the connection between human dignity and human rights. In the aftermath of the French Revolution, the Catholic Church suppressed the language of rights because of the unavoidable association of ‘rights’ with the liberal ideas promoted by the revolutionaries in France. In the 1940s, the Pope re-introduced and popularized the notion of rights in Catholic discourse in ways that shed its liberal connotations. The idea that dignity is the foundation of rights came to be fitted into an overall framework, shifting the emphasis from the individual to the community, which became the guardian of Christian morality and God’s natural law.

Without claiming any direct influence, I see the same idea now underpinning the Russian Orthodox Church’s thinking on these issues. The argument, elaborated in several important documents issued by the Russian Orthodox Church, is laid out as follows: dignity is not merely one right among others, it supersedes all other rights. But here comes the twist – dignity implies living a dignified life. Those, who persist in sin, and so refuse to lead a dignified life, end up having their rights restricted, if not losing them altogether. Humanity is split not only into sinners and saints, but into those who deserve rights and those who do not. The way this is elaborated and worded makes an intentional connection with the Eastern Orthodox intellectual tradition, thereby giving intellectual respectability to the position of the Russian Orthodox Church. Hence a theory that is – as I would argue – both modern and relatively new gives the impression of having a long and distinguished genealogy.

There is a distinction between tsennost’ (value) and dostoinstvo (dignity), the Patriarch tells us. Every human being has tsennost’, but only some have dostoinstvo since only some choose to lead a dignified life. This distinction is modelled on the ‘image’/ ‘likeness’ scheme, which runs through some patristic texts and was borrowed from there by Russian religious philosophers such as Vladimir Soloviev and his followers.  The divine image is inherent to every human being as such. However, likeness to God is a possibility open to man that he/she needs to attain. 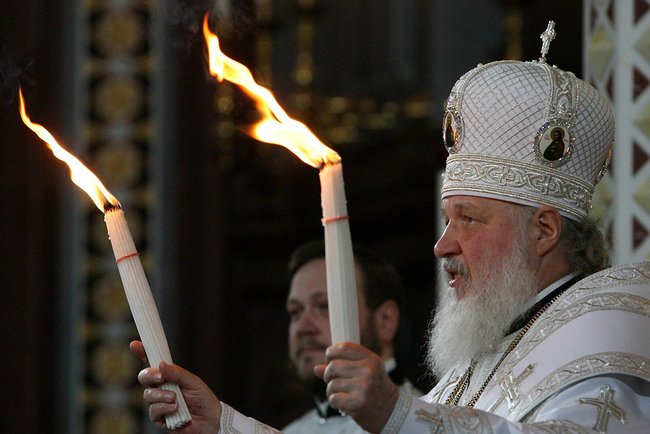 The image/likeness distinction is an element of the belief, central to Eastern Orthodox theology, that, as a result of Christ’s Incarnation, man is God-like and as such has absolute value (the Orthodox doctrine of theosis or deification teaches that humanity has the capacity to participate in a process leading to an increasing likeness or union with God). This idea enjoyed an intriguing afterlife in Russian religious philosophy through Soloviev’s concept of God-manhood (bogochelovechestvo). There is a ‘divine reality’ to man, Soloviev claims. The ‘human person has absolute, divine significance’ and this is ‘an essential truth implied by Christianity’.

Today, the Russian Orthodox Church has turned this theological and religious-philosophical tradition – originally animated by concern with the sanctity of each person’s life – on its head. Nathaniel Wood observed recently that ‘the Russian Orthodox Church’s use of the image/likeness distinction might not only justify restrictions on rights’, but also ‘threatens to reduce at least some persons to a lesser status’. This travesty of Orthodox religious thought emerges from attitudes towards liberalism that the Russian Orthodox Church shares with conservative Catholic circles, active in the years before the end of the Second World War.

This is the background to the curious logic, underlying some of Patriarch Kirill’s sermons since the war in Ukraine started. For instance, on 6 March 2022, Forgiveness Sunday and two weeks into Russia’s invasion, the Patriarch delivered a sermon in the Cathedral of Christ the Saviour in Moscow. Bearing in mind his previous pronouncements, the fact that Kirill used the occasion to justify the Russian invasion came as no surprise to many. What may have been less expected was that the Patriarch’s line of argument in support of the war was based almost entirely on denouncing gay rights. Kirill was particularly incensed by gay parades. It may not be immediately clear how a gay parade in Berlin, for example, might justify Russia’s shelling of Kiev, but anyone who had been watching closely was unlikely to be surprised. The Russian Orthodox Church has explicitly stated on numerous occasions that gay rights and human rights in general represent the hallmark of a Western civilisation that threatens the very foundation of Russia’s unique role in the world. Thus, in its Basic Teaching, the Church warns that ‘human rights protection is often used as a plea to realize ideas which in essence radically disagree with Christian teaching’. The ideas cited include ‘sexual lechery and perversions’, abortion, euthanasia, etc. In his sermons and writings, Patriarch Kirill always makes sure to add homosexuality to the list of transgressions.

It has to be acknowledged that these ideas have a long history in Russia and were expressed, in one form or another, by thinkers without whom it would be difficult to imagine modern European culture. Dostoevsky comes to mind. At the same time, it also needs to be recognized that, today, liberal rights remain under attack in many parts of the Western world, including in countries at the forefront of the opposition to Putin’s illegal war. Consider some current developments in Poland, for instance. There is, in this sense, nothing typically Russian or Eastern Orthodox about the core argument within this discourse, whatever the Patriarch may want us to believe. The notion of a civilizational opposition between Russia and the West, ‘the clash of civilizations’ relished by many Russian thinkers and, nowadays, popularised in the West, can be much overstretched. In this particular case, it is not Dostoevsky but Pope Pius XII who sounds closest to the Patriarch.

The contention that the rights of some individuals or groups, who do not conform to the understanding of ‘dignified life’ prevalent in a society at any particular time, should be curtailed has always been dangerous and morally repugnant. During the Second World War, it gave the Pope license to disregard the genocide committed against Jews and others, and to focus instead on general issues of Christian morality that, in his view, would guarantee dignity. Now, in the face of the ongoing war in Ukraine, what weighs heavily on the Patriarch’s mind is that in some Western countries LGBTQ+ people (who lack dignity in his eyes) have gained rights – a rather recent development, to be sure, so hardly a hallmark of Western civilization.

As a textbook example of how easily depriving one person of rights can slip into depriving any other person or group of rights, the Patriarch has ended up ignoring the rights and dignity of some of his own flock. There is a certain sense of tragic irony in Kirill’s predicament. By choosing openly to support Putin’s war, he has given his blessing to one part of his flock (Orthodox Christians in Russia) killing another part of that same flock (Orthodox Christians in Ukraine). It should be noted that Ukraine is a majority Orthodox country: according to a Pew Research Centre poll taken in 2015, 78% of Ukrainians identified as Orthodox Christian. At the start of the war, this sector of the population belonged to two ecclesiastical bodies – one under the jurisdiction of the Ecumenical Patriarch of Constantinople and the other under the authority of the Moscow Patriarchate. In other words, in early March, when Kirill gave his sermon, he was still the accepted spiritual leader of many Ukrainians and at least some of them were listening carefully to what he had to say.

Whatever individual members of the Patriarch’s Ukrainian flock may have thought about gay rights, it was not lost on them that their ‘shepherd’ (as Kirill called himself) had not a word to say about the plight of his congregation in Ukraine. Ukrainians were apparently unconvinced that the real threat came from homosexuals rather than from the invading Russian army that was committing daily atrocities against them. On 27 May 2022, the Ukrainian Orthodox Church declared its independence from the Moscow Patriarchate. In doing so, it made it plain that this decision was a direct result of Kirill’s clumsy and callous efforts to justify an unjustifiable war. Recalling the Pope’s chilling silence during the Holocaust, the Patriarch not only failed to condemn Russia’s military aggression but also had nothing to say about the suffering of the Ukrainian population. The fact that the majority of victims of this war were his own people – Christian Orthodox Ukrainians who were part of the Moscow Patriarchate – makes Kirill’s stance even more disturbing.