The New Year is always a time of hope, as we look upon a new beginning. “Hope springs eternal within the human breast,” even when we see few justifications for optimism. But this year, I do see reasons for optimism for people with a mind to travel. I’ve been keeping a Good News List, and it’s running off the page.

I am well aware that what is good news for one person is often considered bad news by another. It’s become conventional wisdom that the United States is very divided, but I don’t buy that. Sure, there are plenty of things to argue about when I am watching a 24-hour news station. There are whole industries built on that supposed antipathy. But when I am out there moving among people, most of those arguments dissolve into nothing. There are broad areas of agreement that we take for granted. For the most part, people get along surprisingly well. Dissension is the aberration, not the rule. Traveling reassures me of that comforting fact. 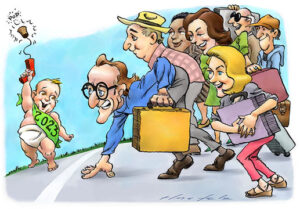 Travel is Back with a Roar
In 2022, travel came back. Air travel is back to about 70 percent of pre-pandemic levels. Although the pandemic left us with supply chain problems and staffing shortages in 2022, things are hopefully smoothing out for 2023 as businesses regain their stride.

Inflation has hit travel, as it has hit everything else, but people are so determined to get back out there that the increase in prices has not had much noticeable effect on the demand for travel. An equalizing factor is that the dollar is stronger than it’s been for a long time. That gives American travelers more buying power in other countries.

Travelers are becoming more confident about travel again. A study by the travel consortium Virtuoso showed that travelers are now booking farther ahead than they were in 2019. In a survey of travelers by American Express, 50 percent of respondents said they were already planning their summer 2023 vacations before the end of 2022. This is all feel-good news.

One of the trends that was accelerated by Covid is the trend toward responsible travel. This line of thinking has continued to evolve, from a time when “ecotourism” was sometimes little more than a marketing angle, to more serious efforts to make travel sustainable by limiting the damage to destinations. And now it’s rising another peg to what is being called “regenerative travel,” that is not just limiting damage, but leaving a place better than you found it. Travelers have become increasingly conscious of these kinds of concerns, encouraging travel providers to increase their efforts to make travel responsible. This is good news for all concerned.

The above-mentioned Virtuoso study found that 70 percent of respondents demonstrate a clear preference for travel companies that are socially and environmentally responsible.

Croatia Joins Schengen
In December, Croatia joined the Schengen group, becoming the 27th country in the largest visa-free region in the world. Croatia is only one small country, but the move has broader implications for people who travel. Not only will Croatia become more accessible, and benefit from increased trade and tourism, it also is a move toward open borders, international cooperation and peace.

Airline Prices Set to Drop
Airline experts are predicting that airline prices, which have risen at a higher rate than inflation in general, are likely to go down in 2023. That’s always nice for dedicated travelers.

Because of effective vaccines and milder Covid variants, the threat has diminished and stringent border regulations are no longer needed.

Mental Health and the Freedom to Travel
As we recover our mobility and the freedom to travel, I have no doubt that it will help to ameliorate the rise in mental health issues that has been reported during the Covid period. Much of that has been a result of isolation and dislocation. That is now receding into the rearview mirror, thanks in no small part to the return of the freedom to get back out into the world again. It’s such a great lift to see people out there experiencing the joy of being free to travel and to gather together again. It was great to see Times Square packed with people again at New Year’s Eve, and to see people celebrating life again.

Good Climate News
Though there are opposing factions on many issues, no one is in favor of climate change. A habitable planet is required for every enterprise. It’s an overarching concern. Because of worldwide mobilization and work on many fronts, things are looking better for the climate.

In October The New York Times published an article by David Wallace-Wells, who wrote “The Uninhabitable Earth,” which was New York Magazine’s most-read article ever. A New York Times review called his book by the same name “the most terrifying book I have ever read.”

But now, in his new essay, “Beyond Catastrophe: A New Climate Reality is Coming into View,” he writes that he has modified his prognosis ­– not because he was wrong, but because of human action.

“Just a few years ago,” he wrote, “climate projections for this century looked quite apocalyptic.” Now, however, things are looking significantly better. “Thanks to astonishing declines in the price of renewables, a truly global political mobilization, a clearer picture of the energy future and serious policy focus from world leaders, we have cut expected warming almost in half in just five years.”

That is seriously good news. It shows that human action can make a difference, and encourages us to do more. It’s a bright beam of sunlight through what has been a very dark cloud, and will make us all feel better. There are many things happening that point to a more hopeful climate future. There are now machines that can pull carbon out of the atmosphere and store it safely in basalt rock in the earth’s crust. The technology is still a work in progress, but it offers hope.

One of the most inspiring reports lately is about scientists in California succeeding for the first time in creating a controlled nuclear fusion reaction. Fusion draws energy from hydrogen, as in water, and produces no waste. This could provide an inexhaustible supply of cheap, clean energy. That one fact makes another world possible. No one knows how long it will take to make fusion-generated energy practical. But scientific advances are accelerating, so this is an area of great promise.

My list could go on, fortunately, but there is only so much room here. The Covid period has been tough, no way around that fact. But as Covid continues to recede, there are so many reasons to be hopeful. And I feel a new surge of hope within myself. I hope you also feel it.