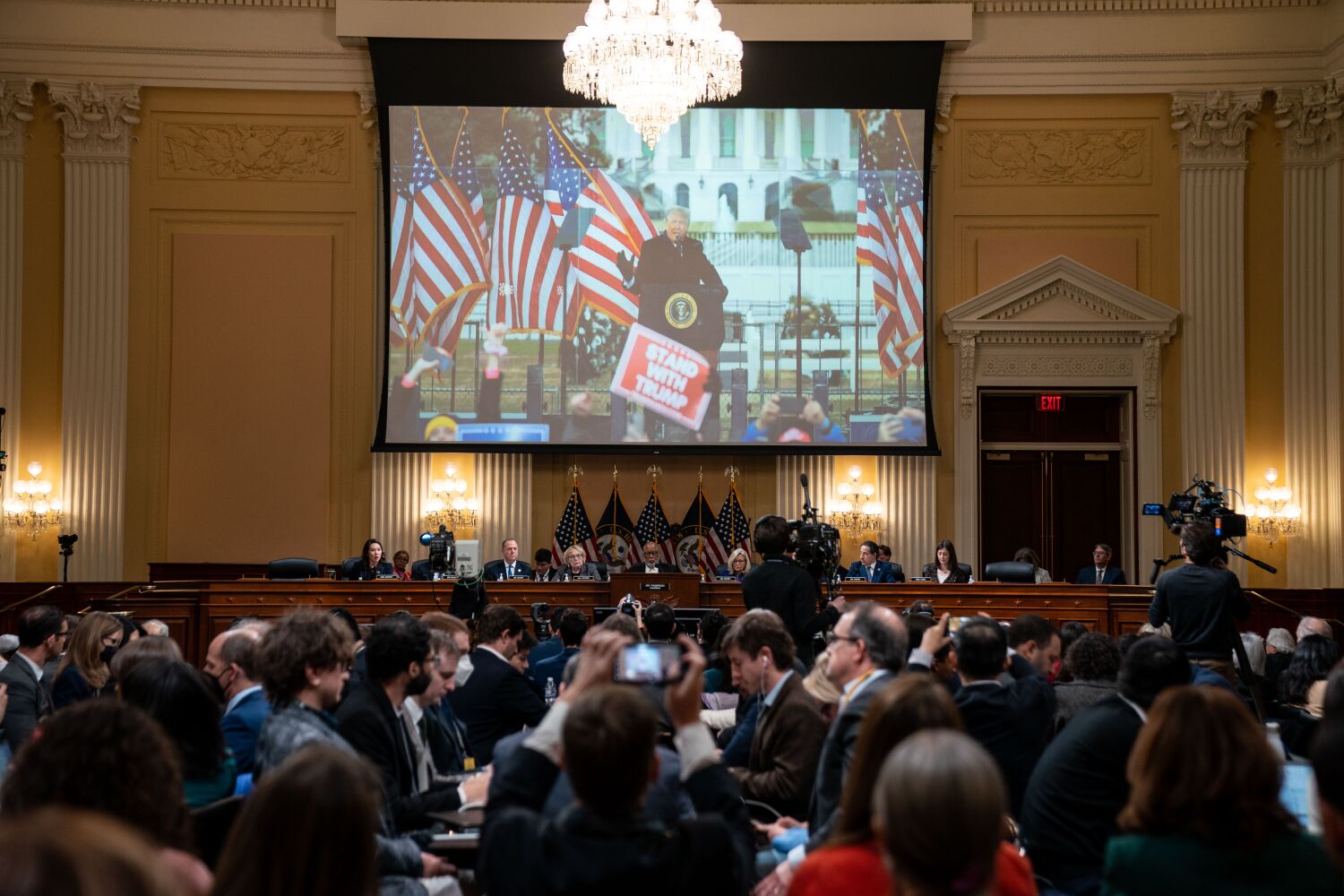 The 845-page final report of the House Committee on Jan. 6, which finally arrived late Thursday night, is an epic. Like “Moby Dick” or “War and Peace,” it is destined to be admired more than read.

That’s a shame; don’t be deterred by the page count. The narrative at the heart of the report — the story of how former President Trump tried to overturn the 2020 presidential election by extralegal means — takes up less than half of the volume. (The rest is mostly footnotes and legal briefs.)

By now, though, most of us are already wondering about the sequel: Will Trump be held legally accountable, just as more than 900 of his followers who stormed the Capitol have been?

“Ours is not a system of justice where foot soldiers go to jail, and the masterminds and ringleaders get a pass,” Rep. Jamie Raskin (D-Md.), a member of the committee, said last week.

To nudge the Justice Department toward indictments, the committee offered four federal charges that could be brought against Trump:

Inciting or assisting an insurrection; conspiring to defraud the United States; obstructing an official proceeding; and conspiring to make a false statement.

With an 845-page report based on more than 1,000 interviews, surely some of those charges will be brought, right?

Perhaps, but former prosecutors warn these cases may not be as easy as they look.

Insurrection, the House committee’s boldest charge, could be the least likely. The committee argued that Trump not only incited the storming of the Capitol, but also gave the insurrection “aid and comfort” by failing to intervene to end it.

“That’s the toughest case — the one I think no prosecutor will ever bring,” said Norman Eisen, who was a counsel to the House Judiciary Committee when it impeached Trump in 2019.

“Hard to prove, and rare,” agreed Paul Rosenzweig, a former prosecutor who worked in Republican administrations.

“It brings legal interpretation risks,” including over whether the Jan. 6 riot qualifies as an insurrection.

“It relies mostly on an act of omission,” Trump’s failure to quickly urge his followers to stand down.

“And to the extent it is an incitement case,” he said, “it has 1st Amendment issues.”

Federal prosecutors prefer cases that are easy to win, which means easy to prove to a jury.

That’s not simply a matter of professional vanity or risk aversion. Justice Department regulations require prosecutors to consider whether a case is likely to produce a conviction before they bring an indictment.

“For a jury, simpler is better — always,” said Rosenzweig.

To former prosecutors, and presumably current prosecutors too, the House committee’s argument for charging Trump with insurrection sounded like a declaration before history, not a practical suggestion.

One of the committee’s other recommended charges, conspiracy to defraud the United States, also comes with problems.

“It is big and burly, with lots of spokes,” Rosenzweig said, listing three:

“Electors” — Trump’s campaign to produce slates of bogus electors from states Joe Biden won. “Pressure on Pence” — Trump’s attempts to bully his vice president into overturning the result. And “influence on the Justice Department.”

“That’s an eight-week trial, minimum,” he said. “It hits the mark, but is hard to prove.”

An easier and more attractive charge, several prosecutors said, is obstruction of an official proceeding — for Trump’s attempts to prevent Congress’ formal count of electoral votes.

“It’s pretty easy to describe in a common-sense way to a jury,” said Donald B. Ayer, a former Justice Department official under President George H.W. Bush.

“A good charge, easier to prove, as [it’s] focused just on the electoral count,” said Rosenzweig.

The easiest of all, prosecutors said, could be a recommended charge that has received relatively little attention until now: conspiracy to make a false statement, based on the effort to send Congress bogus electors who would vote for Trump.

“It’s a relatively simple case,” said Eisen. “You have a smoking gun in the form of the electoral slates. There’s plenty of evidence that Trump and his lawyers undertook that process for improper reasons.”

Still, the lawyers said, if you’re looking for the cases most likely to put Trump in the dock, look elsewhere.

The first case that Jack Smith, the Justice Department’s special counsel, brings may stem from the Mar-a-Lago investigation — the probe of Trump’s unauthorized storage of thousands of government documents, many of them classified, at his Florida estate.

Even before the Mar-a-Lago cases come to a head, Trump may face state charges in Georgia, where a county prosecutor is investigating the former president’s demand that state officials “find” just enough votes to overturn Biden’s victory there.

That grand jury is already writing its final report on whether Trump’s actions violated a Georgia law prohibiting solicitation of election fraud.

So it’s increasingly likely that Trump will face criminal proceedings as soon as next year.

Just don’t expect them to look like the ambitious charges the House committee proposed in last week’s report.