King Charles now rules a monarchy that may need to change 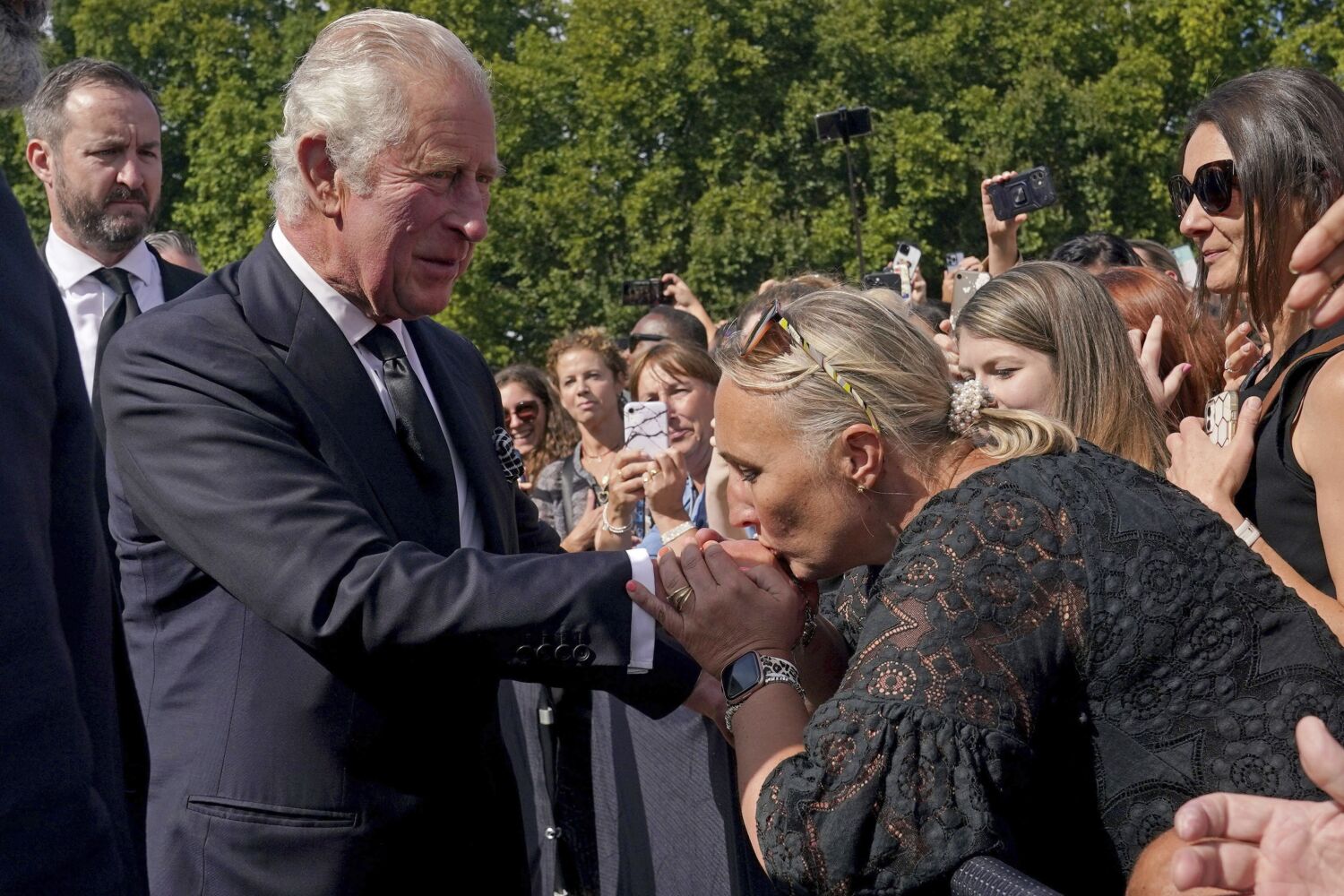 The flood of sorrowful memories and admiring tributes for the late Elizabeth II recognizes her multigenerational impact as both a woman and the queen.

But the respect and love she engendered as an international figure do not necessarily extend to the monarchy itself, an institution that costs a fortune to sustain and embodies a bevy of arcane and perplexing traditions that help define Britain but that often seem anachronistic.

A rising tide of anti-royal sentiment thrusts a British throne without Elizabeth into precarious territory, particularly when her successor happens to be her less popular, long socially awkward son Charles.

Royal-watchers say the situation raises questions about the future of the monarchy and how, or whether, it can continue to hold its sovereign sway. At the least, they say, Charles will have to streamline an organization that controls vast numbers of estates, castles and treasures. And as Britain faces high inflation and other economic woes, members of the extended family need to be seen as paying their own way, the analysts say.

Moreover, the new king will face mounting demands from the descendants of Britain’s colonial lands who seek justice, apologies and reparations for the brutality of British settlers and enslavement of untold thousands of Black people and others.

“We have to separate the huge support and love for the queen from the much smaller support for the monarchy,” said Pauline Maclaran, professor of consumer research at Royal Holloway, University of London.

“The family has to manage this like a brand transition,” she added. “If Charles becomes the only face of the monarchy, he will not get the support he needs. So they will bring [Charles’ son] William and Kate into the forefront more and more as well as the young royals, such as [their son] George.”

King Charles III seemed to be doing just that in his first address to the nation Friday.

Speaking from Buckingham Palace, Charles did his best to burnish his ties to the more popular members of the royal family: his mother, of course, but also Prince William and his wife, Kate, who were named Prince and Princess of Wales. They are the parents of George, Charlotte and Louis.

And then Charles expressed his love for his other son, Harry, and his American actress wife, Meghan Markle, “who are building their lives overseas.”

His comment was perhaps surprising, as the pair dispensed with royal tradition by renouncing their official roles and moving to California in 2020, then telling Oprah Winfrey about racist treatment that Meghan, who is Black, had experienced in royal circles. Family relations have been strained ever since, and Charles’ reference to them may have been an offer of reconciliation.

The British monarchy is an institution that has existed for more than a millennium in one form or another and has survived cataclysmic wars and tectonic political shifts. It evolves.

In the Second Elizabethan Era, there were scandals over money and sex and periodic spates of public questioning of its usefulness and raison d’etre. More recently, the royal institution has survived by adapting, shifting and maintaining relevance — sometimes more successfully than at other times (case in point: the debacle of the handling of the shocking death of Charles’ first wife, the popular Princess Diana).

Elizabeth’s greatest success was to continuously justify the monarchy by using it to encapsulate the values Britons wanted to hold dear and believe in — stoicism, dignity, service — and then reflected back on them, said Katie Hindmarch-Watson, a historian at Johns Hopkins University in Washington, D.C.

Whether Charles can re-create the “fantasy and aspirational character” of the monarchy that secured Elizabeth is an open question, Hindmarch-Watson said.

“Will it work in 2020 the way it did in 1953? Will it do that magical trick of turning Charles into a national figure and mascot of values?” she said. “Or will it highlight the artifice of the monarchy, its oddness in modern society in a purported democracy?”

Charles may be able to win over some younger constituents with his dedication to raising awareness about climate change. And his sons may have the best grasp on managing social media and public expectations that the palace has ever seen.

Still, the royals face growing challenges at home and abroad.

On one hand, the family and its working members are engaged in a variety of charitable causes, with Charles expected to increase his ongoing focus on climate change. At the same time, the image of an aristocratic clan that jet-sets around the world and lives in palaces and castles clashes with that of everyday Britons struggling with skyrocketing energy costs and inflation that has left the nation on the verge of recession.

It is difficult to say with precision how much the royal family costs the British public. The palace says each Briton pays about a pound a year (about $1.16) to sustain the monarchy, a total of roughly $80 million a year. But anti-royalists insist the annual cost is five times that. A 2015 analysis by Reuters estimated the family’s assets to be worth nearly $35 billion.

Polls before Elizabeth’s death have shown continued support for the monarchy, but those campaigning to do away with it and replace it with a republic believe they may have an opening with the ascension of Charles.

“I’ve never liked the monarchy,” Graham Wilson, a 48-year-old tech worker said on his daily commute toward central London on Friday. “Honestly, I am just wondering how many bank holidays we will get out of this. Mourn her if you desire or do not mourn her. She had a lot of fans, that is very true. I don’t think Charles has as many.”

Everton Brown, who waited for a train going the opposite direction to meet friends outside the city, said it was an “unusual” moment for his family. A proud Londoner, he said he felt “a little affection” for the royals because of their constant presence in British life. But as a man of Jamaican descent whose parents immigrated to the U.K. in the 1960s, Brown said the queen represented a “time in history that was wrong,” a reference to imperial Britain.

“She was the queen of Jamaica until she died, and now her son is the king of Jamaica,” said Brown, 36, speaking of one of the 14 Commonwealth nations that formally have the British monarch as their head of state, including Australia and Canada. “I do not believe that to be logical. This monarchy system must end or change in some way.”

Outside the U.K., that too is a sentiment gaining steam.

Last year, Barbados decided to drop the queen as its head of state. Jamaica is considering making the same move. A trip to the Caribbean in March by William and Kate was supposed to encourage support for the royals. Instead it did the opposite, as critics assailed photos of the couple shaking hands with Black kids in Jamaica through a wire fence.

The president of Barbados, upon Elizabeth’s death, underlined the split, albeit diplomatically.

When Barbados “took the decision to complete the course of independence” it broke “constitutional ties with the British monarchy” and will establish “the world’s newest republic,” President Sandra Mason said. “Significant as that decision was, given the place Barbados has held in the British Empire for centuries, it did not in the least diminish the friendship between our two nations, or indeed with Buckingham Palace.”

Movements have also risen over the years in Australia and Canada to remove the monarch as the head of state but foundered. In Canada, the constitution would need to be amended. The leader of the Australian Greens party, Adam Bandt, tweeted Thursday that Elizabeth’s death was the moment the nation needed to change its relationship to Britain.

“Our thoughts are with her family and all who loved her,” Bandt wrote. “Now Australia must move forward. We need Treaty with First Nations people, and we need to become a Republic.”

Kaleem reported from London and Wilkinson from Washington.