Half of pupils who get low grades in GCSEs already judged to be behind at age 5, study finds 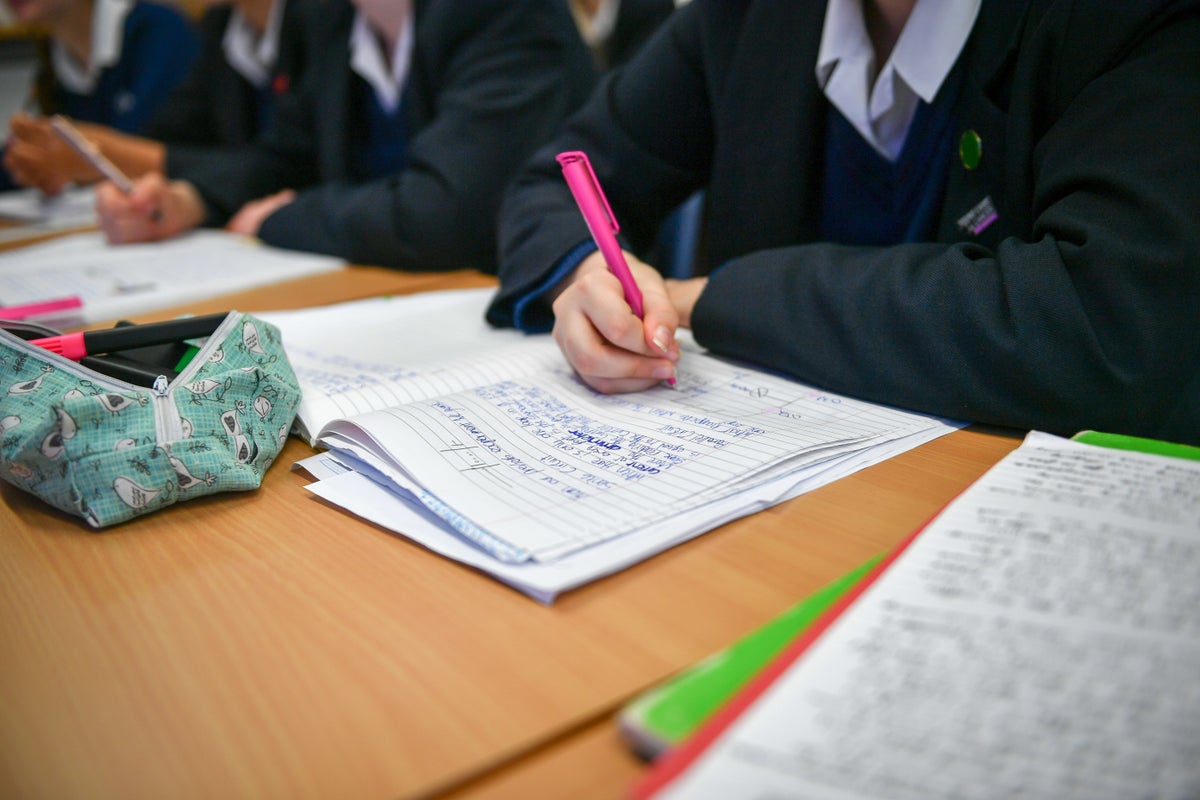 Half of schoolchildren who do not pass their maths and English GCSEs were already judged to be behind on their education at the age of five new research has found.

A fifth of all students in England, or around 100,000 pupils each year, do not achieve the grade 4 pass grade in both English language and maths.

The government has set out a plan for 90 per cent of children to reach the expected standards in reaching, writing and maths by 2030, a spokesperson for the Department of Education said.

Researchers from the University of Exeter and UCL used data from the UK Millennium Cohort Study to map the educational trajectories of 11,524 students born in England in 2000-2001, who then went on to take their GCSEs in 2016 or 2017.

They presented their findings on Thursday in a working paper, which has not yet been peer-reviewed.

The academics found that 18 per cent, or a fifth, of teenagers failed to achieve a grade 4 in both English language and maths. Of those students, just under half (48 per cent) had not reached expected levels of numeracy and literacy at the age of five.

More than one in four of them, 28 per cent, had been assessed as “delayed” in their learning at the age of three.

Since their first survey when they were nine months old, the children were followed up six times between the ages of three and 17 – providing regular assessments of how they were doing in school.

The paper found that children who were assessed as not being “school ready” at age three, and who were below expected standard levels at age five and age 16, often had similar family backgrounds.

These children were also three times as likely to have parents with no or poor education qualifications. Their home was also more likely to be rented, overcrowded, damp, or situated in poorer areas, compared to their peers.

Early years educational disadvantage was associated with being Black, Asian or minority ethnic and living in a home where an additional language (other than English) was spoken. However, this setback was reversed as the children grew up.

Not attaining a grade 4 or higher GCSE in English language and maths was associated with being white and only English being spoken in the home.

Labour MP Ms Phillipson said: “High equality early years education is essential to boosting outcomes for children, but under the Conservatives early years support is increasingly unavailable and unaffordable, putting this essential education out of reach of more families.”

She vowed that a Labour government would tackle low literacy and numeracy and would end tax breaks for private schools “to invest in driving up standards across all schools for every child”.

Mr Elliot Major, professor of social mobility at the University of Exeter, added: “Government attempts to address this challenge will fail without high-quality support for children during the pre-school years and greater efforts to identify, diagnose and most importantly respond to children falling behind at early stages of schooling.

“We should also consider introducing a basic threshold qualification for functional literacy and numeracy skills that all school leavers would be expected to pass.”

Dr Sam Parsons, an academic at the UCL Centre for Longitudinal Studies and co-author of the study, said: “Poor performance in the early years together with socio-economic disadvantage are clear risk factors for poor performance in GCSE English language and maths examinations, which are in turn increasingly crucial for post-16 transitions.”

A spokesperson for the Department of Education said: “The recently published schools white paper sets out our ambition for 90 per cent of children to reach the expected standards in reading, writing and maths by 2030.

“This is supported by excellent teaching and our pledge that if any child falls behind in English and maths, they will receive timely and evidence-based support to help them to reach their potential.”

They added that nearly £5bn has been invested to help children recover from the impact of the pandemic on their education.