Two of the best known technical trading setups are the “crosses,” or the Golden Cross and the Death Cross.

They are used to signal the potential start and end of long-term uptrends and downtrends. This technical analysis method is usually used on the daily chart.

You’ll learn how to get Golden Cross and Death Cross alerts on your computer or smartphone.

Most importantly, you’ll also learn how to backtest these crosses to see if they actually work in the markets you trade (no coding needed).

A Golden Cross occurs when the 50 SMA crosses above the 200 SMA.

This suggests that the market is entering a long-term uptrend.

Here’s an example of a Golden Cross in Bitcoin.

After the cross, the market went on a big run.

This is another example on the AT&T chart. 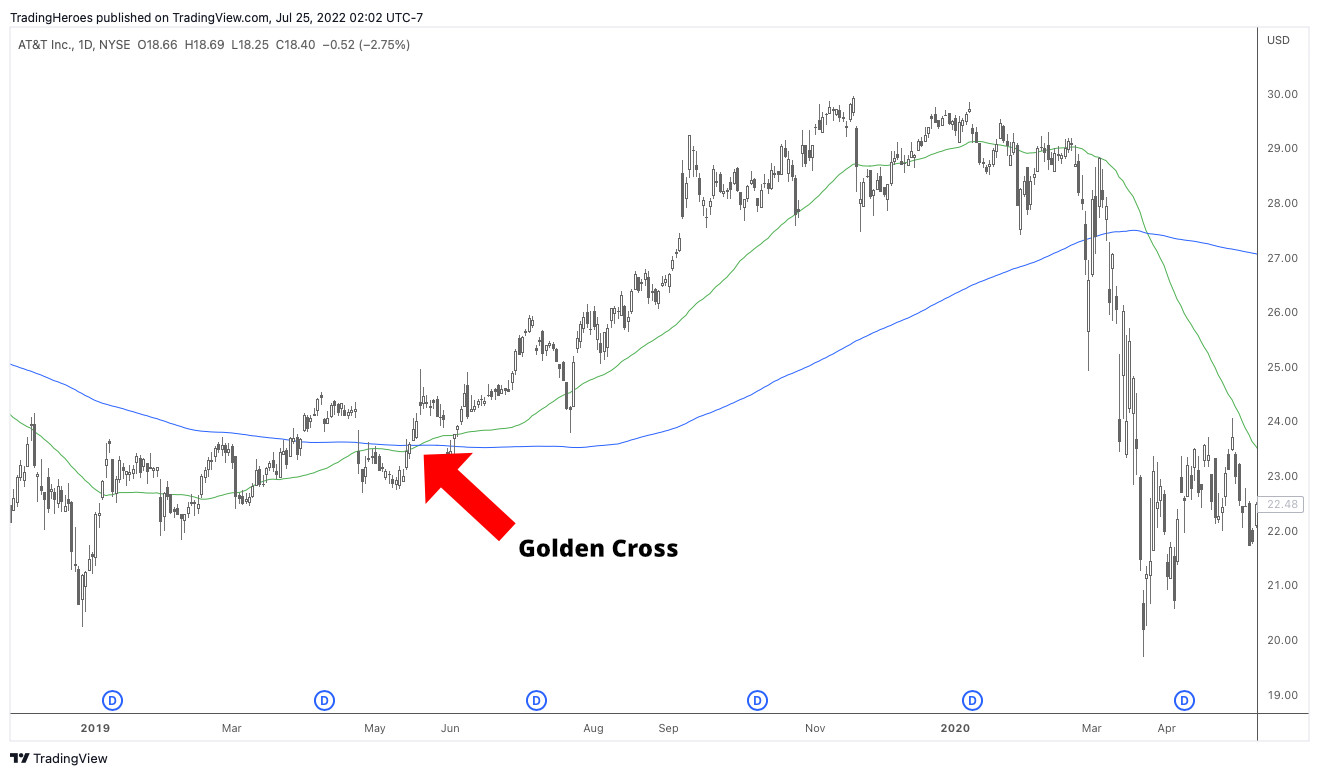 It’s very easy to spot a Golden Cross, once you know what to look for.

Conversely, a Death Cross occurs when the 50 SMA crosses below the 200 SMA.

This is a clue that the market could be entering a long-term downtrend.

Here’s a Death Cross in the Nasdaq, which signaled the beginning of a bear market. 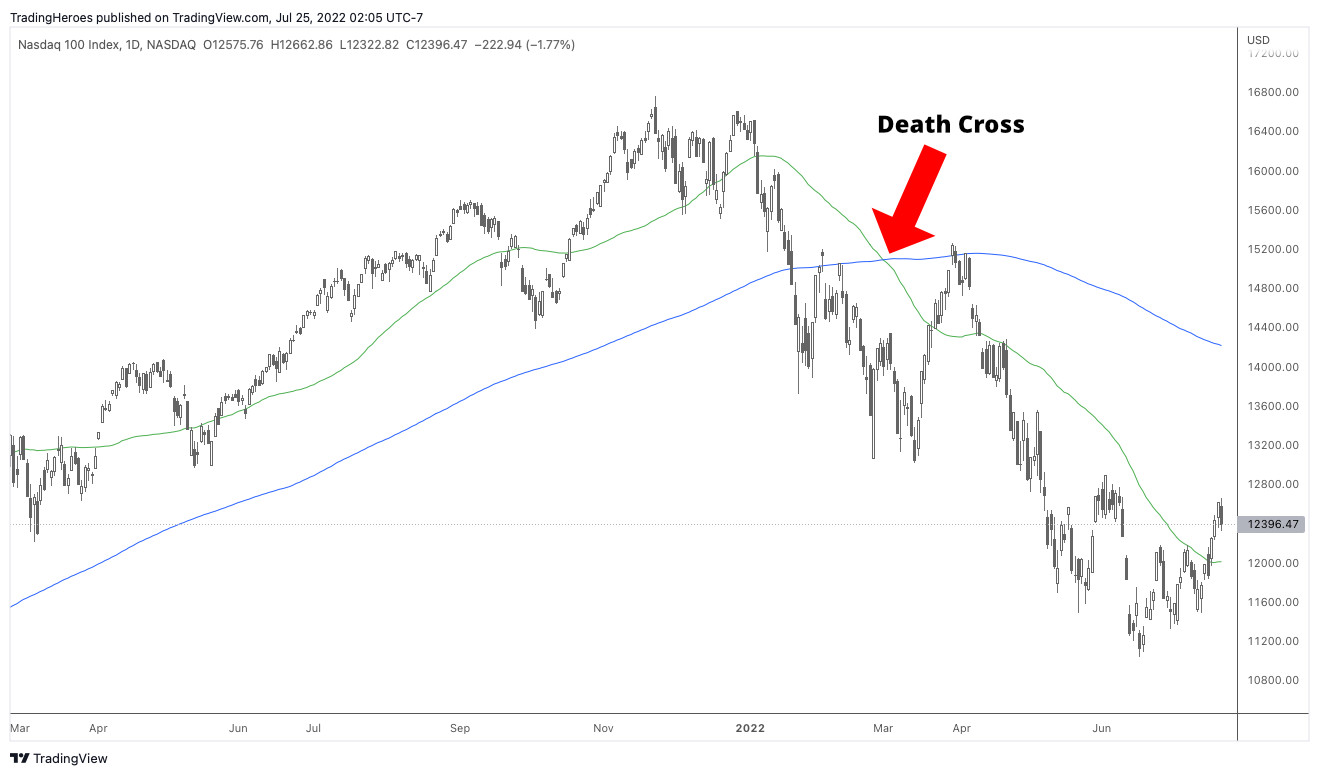 Another chart showing a bearish cross on a AUDUSD chart. 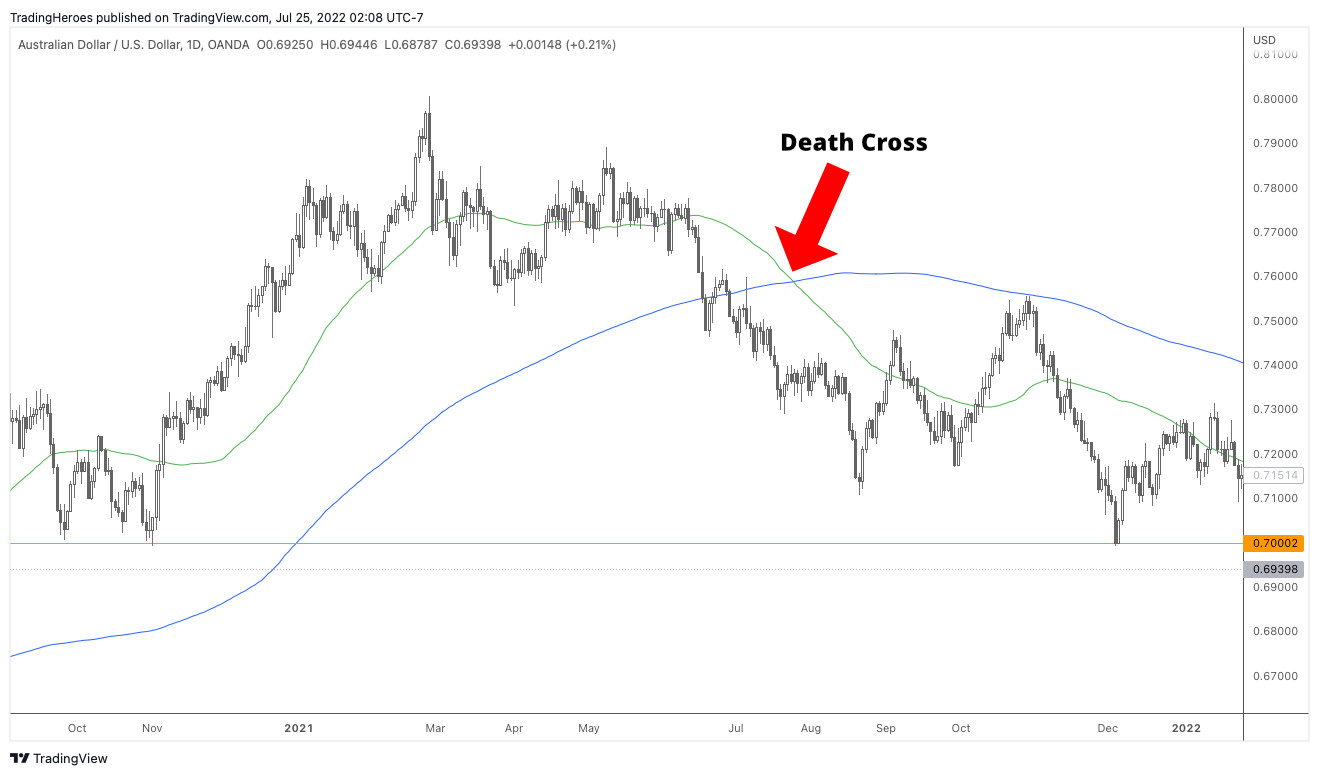 Now that you know what these crosses look like, the next question is…

Most of the research around moving average crossovers has been done in the stock market.

This is a study that I found particularly interesting because they tracked both Golden Crosses and Death Crosses across multiple US stock sectors.

As you can see, trading these crosses worked out well during the bull market between 2009 and 2018.

They also did a longer-term study over 20 years, and the results were also profitable.

However, there’s a twist to this study…

Instead of selling short on a Death Cross, they actually went long.

They found that this method generally outperformed the Golden Crosses in a bull market because they were entering the uptrend on a pullback.

So although a moving average crossover is a super simple concept, there are many variations that you can experiment with.

Some of them might work better than the basic strategy.

When These Crosses Don’t Work

Just like with everything else in trading, a Golden Cross or a Death Cross does not a guarantee a profitable trade.

There will be periods where the market goes into consolidation phases and that’s when you can lose money. 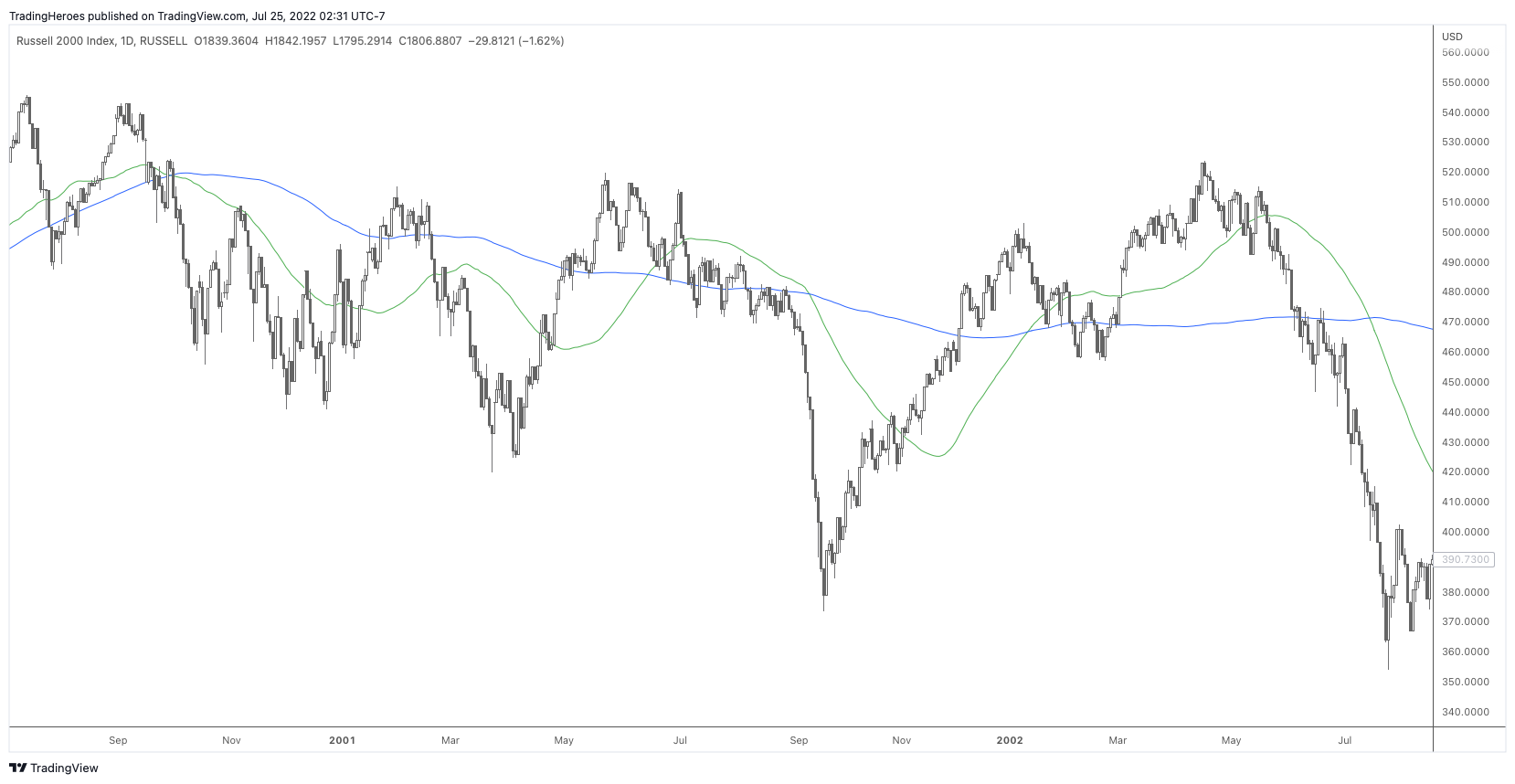 If you took every trade on this chart, you would end up with a net loss.

So be aware of the market you’re trading and if price action starts to get choppy, it’s best to pause and re-evaluate.

There are several ways that you can optimize your entries and make your trades more profitable.

Here are 2 ideas that you can experiment with…

Instead of buying or selling exactly when the crossover happens, you can look for an area of support or resistance after the cross to enter a trade.

For example, instead of going long exactly at the Golden Cross on this gold chart, you could wait for the support level to form at the orange line.

Then you could buy below the orange line to get a better price than if you entered at the crossover.

As long as price stays above the 200 SMA, your trade has a good chance of working out. A good place to put your stop loss is at, or slightly below, the 200 SMA.

This entry method will also give you the opportunity to get in late, if you missed the original signal. 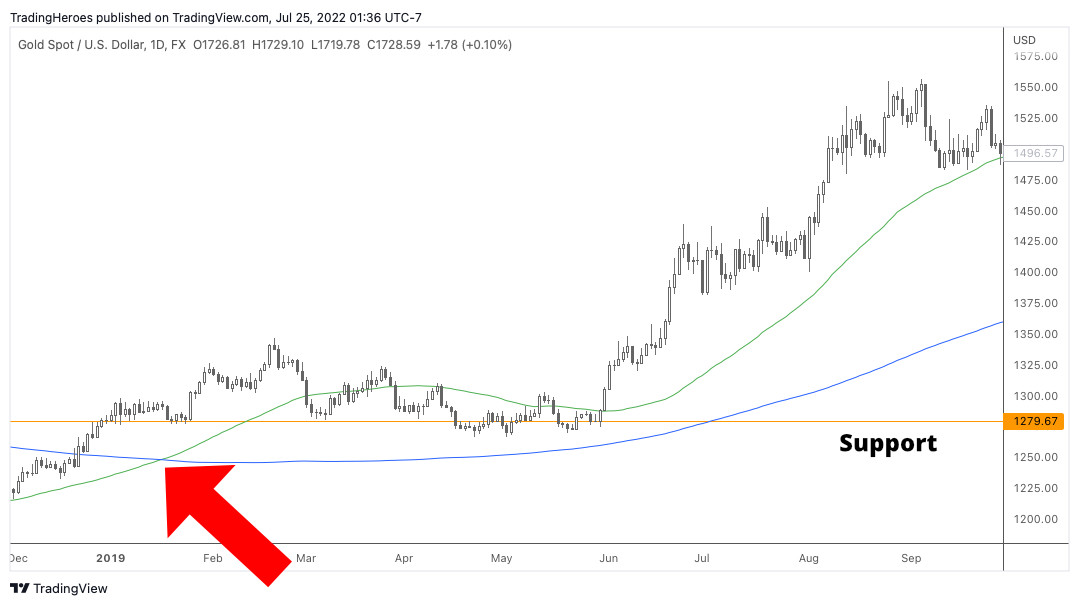 It would be the same idea in a downtrend, except you would be looking for resistance after a Death Cross.

After a cross, you could also trade a retracement to the 50 SMA.

This entry will cause you to lose out on some profits, but it will also help ensure that you’re in a strong trend.

For example, here are a few long entries that would have worked in the S&P500. 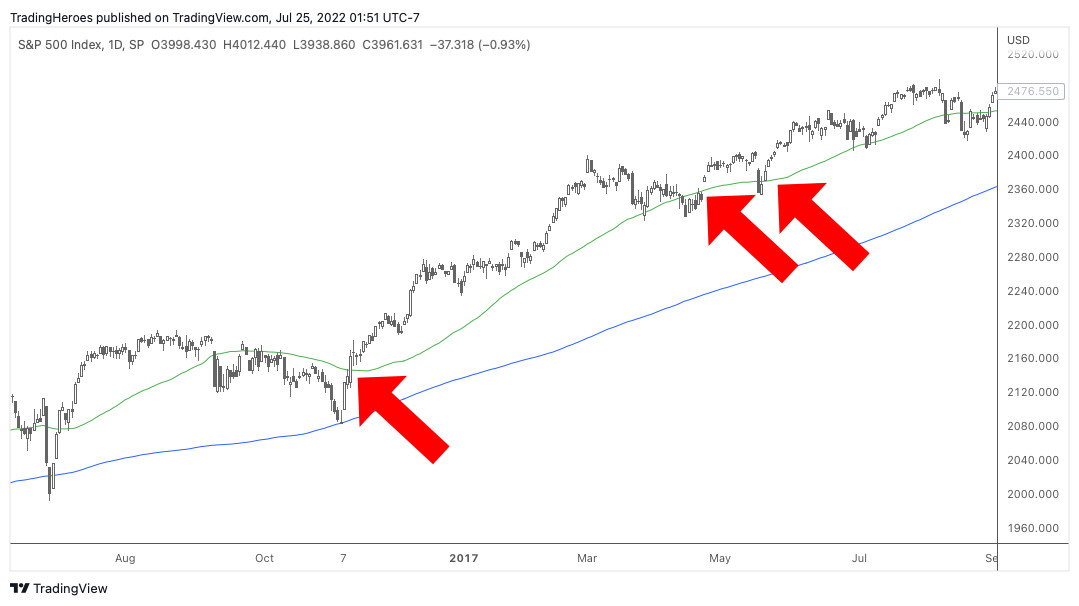 Next, wait for price to drop below the 50 SMA, then close back above it to enter a long.

Then trail your stop loss is a way that you feel comfortable with. A great place to start would be a close below the 50 SMA.

Again, it would just be the opposite in the case of a downtrend after a Death Cross.

In order to find out if these ideas will work in the market you trade, you’ll have to backtest.

Here’s how to do that…

How to Backtest Golden and Death Crosses

Let’s get real, most trading strategies don’t work in all markets.

So you’ll have to do some testing to figure out which markets work with these moving average crossovers.

Since these moving averages are so easy to setup, you can quickly backtest them in any market and on any timeframe.

Backtesting is essential because you want to know that the strategy has worked over a long period of time, which will give you confidence to take trades.

If you’re new to backtesting, then read my backtesting guide for beginners to get started.

NakedMarkets is a great software for backtesting strategies, especially if you don’t know how to code.

The first thing you should test is the basic version of the strategy.

For a long, do the following:

For a short, do the following:

From there, test the optimization ideas listed above.

If there’s a market that you want to trade with these setups, then it’s time to create alerts so you don’t miss any signals.

How to Get Golden Cross and Death Cross Alerts 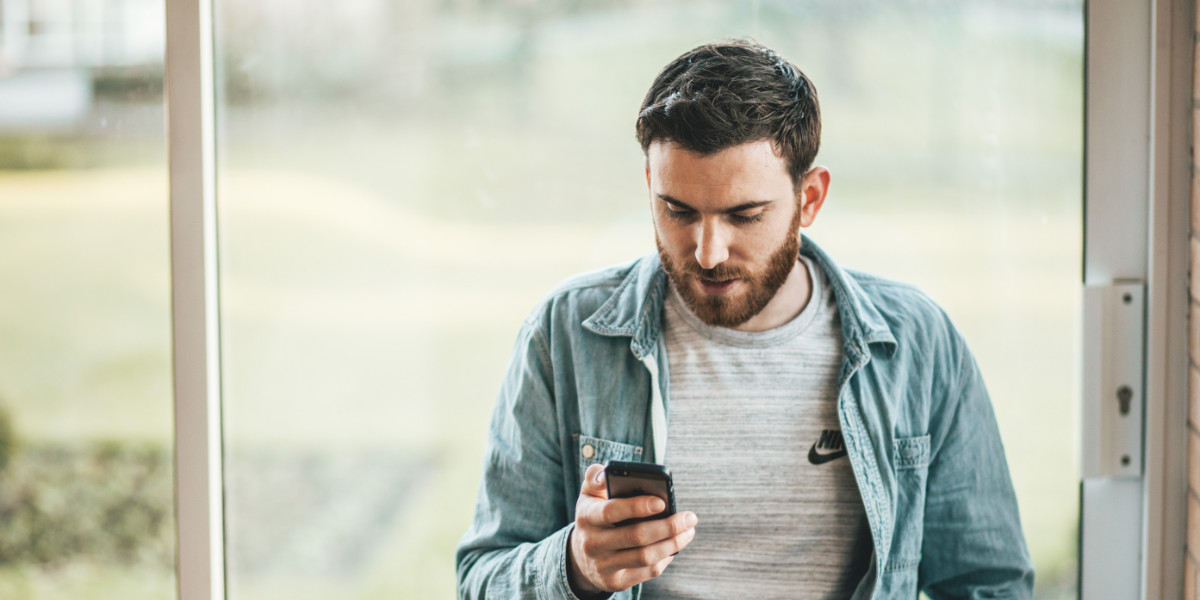 There are a few different ways to get alerts for these setups on your laptop or mobile device.

However, the easiest way that I know of is to use TradingView.

They have a ton of markets available, so there’s a very good chance that they have a chart for the market you trade.

Since your alerts are hosted on their servers, you don’t have to worry about keeping your computer on all the time.

It’s easy to setup alerts, which will ensure that you don’t miss any signals.

First add the 2 moving averages to the chart. 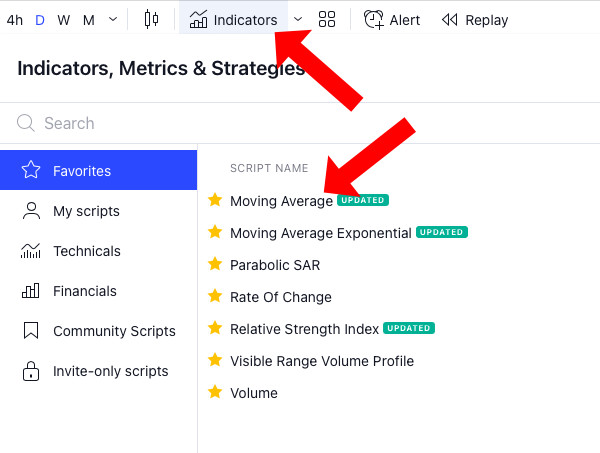 Now you’ll see the moving average on the chart.

Double click the moving average line to pull up the settings.

Here are the settings for the 50 SMA. 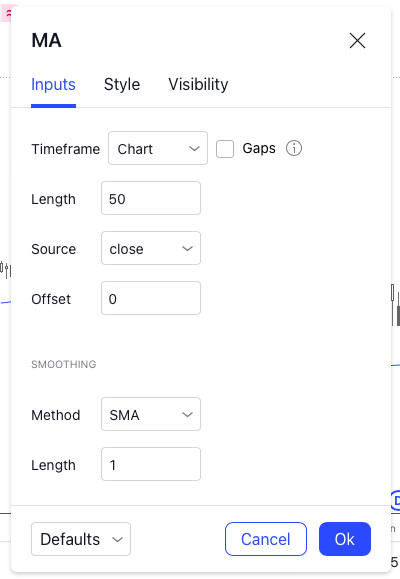 Add another Moving Average and change the Length to 200. 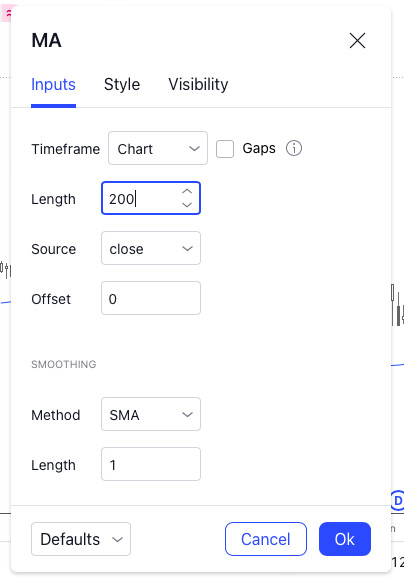 Then right-click on the 50 SMA and select Add alert on MA. 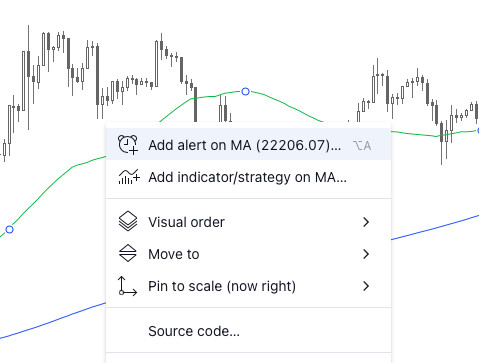 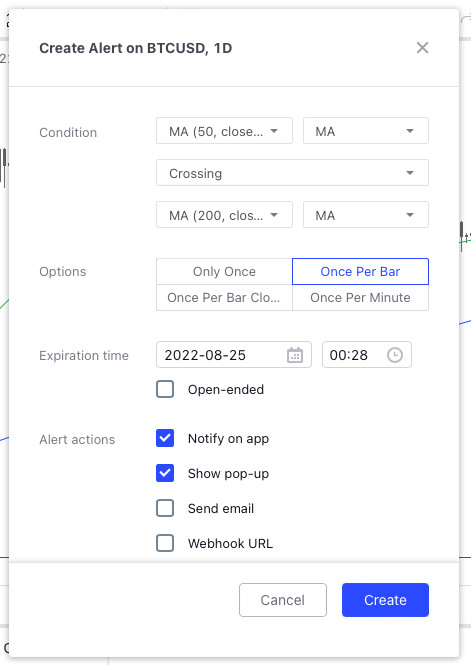 If you want email or SMS alerts, you can select them under Alert actions.

The best part about these setups is that they are simple and can be added to any chart, on any platform.

But just knowing about these entries is not enough.

You have to backtest the strategies to see if they have an edge in the market(s) you trade.

Then keep a good trading journal to be sure that you’re executing your trades correctly.