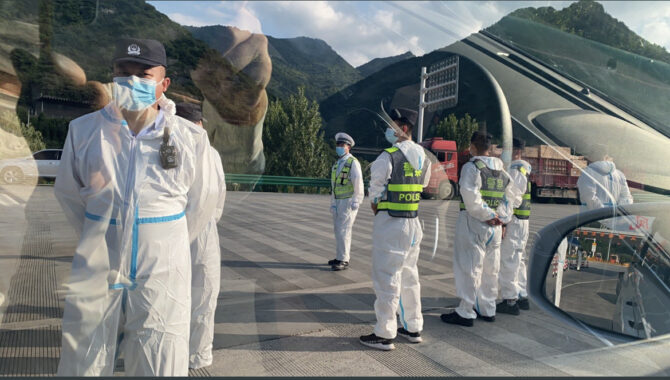 (Chinese Human Rights Defenders, July 26, 2022) The July 26 trial of lawyer Chang Weiping in China is yet another incidence of a travesty of justice. The Chinese government, in light of its international obligations to protect human rights, must immediately and unconditionally release Chang Weiping.

Having been subjected to torture, arbitrary detention, and systematic deprivation of due process rights for years, human rights lawyer Chang Weiping stood on trial at the Feng County Court in Shaanxi Province on July 26, 2022. Mr. Chang faced the charge of “subversion of state power” and authorities conducted the trial behind closed doors. After the trial began at 9am Beijing time today (July 26), the trial ended in less than two and half hours without a verdict.

Chang, who represented many persecuted human rights defenders, especially those defending the rights of workers, women, LGBTIQ groups, and members of officially banned religious groups, was detained in October 2020 after he made a YouTube video describing how police tortured him while in detention earlier in 2020. Authorities subjected Chang to further torture for his actions in documenting and exposing torture in China’s detention system.

“The fact that Chinese authorities have deprived Chang Weiping of his fair trial rights, subjected him to torture, and have now used ‘Zero COVID’ measures to prevent his family from attending his trial, speaks clearly: the only right thing to do is to immediately and unconditionally release Chang Weiping,” said Renee Xia, CHRD’s Director.

Torture Used to Penalize a Critic of State Torture

To a large extent, Chang Weiping’s case is about the Chinese government trying to cover up its notorious practice of torture during secret detention. Police seized Chang Weiping from his home on October 22, 2020, days after he released a video on YouTube in which he described the torture that he was subjected to while he was detained in January 2020. In December 2019, Chang had attended an informal gathering of civil society advocates in the coastal city of Xiamen. After the Xiamen gathering, police launched a nationwide manhunt, and put many of the attendees into secret, incommunicado detention known as “residential surveillance in a designated location” (RSDL).  Chang Weiping stated in his YouTube video that while in RSDL he was strapped to a tiger bench for 10 days straight during interrogation and had lost feeling in two fingers as a result of injuries from the punishment.  CHRD outlined the torture allegations in detail in a submission to the UN.

For nearly a year Chang was held incommunicado and denied access to a lawyer, but finally on September 14, 2021 Chang was permitted to see a lawyer. Shockingly, Chang revealed that while in detention he was once again tortured: he was forced to sit on a “tiger chair” for six days straight and face round the clock interrogation. He was also subjected to prolonged sleep deprivation unless he complied with police demands.

But perhaps most seriously, he noted that he had started to have blood in his stools, a problem that has apparently persisted into 2022.  Chen Zijuan recently wrote to the authorities asking that Chang be provided with a colonoscopy, in accordance with  PRC Detention Center regulations and other legal provisions regarding medical treatment of detainees. .

In May, Chen Zijuan revealed that authorities called Chang Weiping’s lawyer to let them know that it was possible to read his casefiles – this after six months without Chang being permitted to see a lawyer again. However, judicial bureaus from the lawyers’ local areas told the lawyers that they could not make copies of the casefiles, which in essence means that a lawyer would have to read through hundreds of pages on the spot and memorize the contents or copy down the important parts in notes by hand.  Chen also said that the authorities had put pressure on Chang’s previous lawyers to drop his case.

On July 11, 2022, a pre-trial hearing was held at the Feng County Detention Center and Chang Weiping reiterated how he was tortured.

The Chinese government, as a party to the Convention against Torture and Other Cruel, Inhuman or Degrading Treatment or Punishment, should immediately launch a prompt and impartial investigation of police officers accused of committing torture and prosecute any individuals who have been found to have violated Chinese law and international law.

“The Chinese government should be launching an investigation into the conduct of any government personnel accused by Chang Weiping of torturing him and hold to account anyone responsible for committing such a criminal offense. Instead, Chinese officials are covering up their abuse by subjecting Chang Weiping to an unfair trial on the absurd charge of ‘subversion’ for making a YouTube video describing how he was tortured,” said William Nee, CHRD’s Research and Advocacy Coordinator.

Intimidation of Family: Obstruction of Justice with COVID Measures

Local authorities went to extraordinary lengths to prevent Chang’s wife Chen Zijuan from attending the trial, including using COVID-19 prevention measures as a pretense. On the evening of July 25 and into July 26, Chen Zijuan sent out a series of tweets with photos describing her situation. Upon flying to the city of Xi’an and starting to drive towards remote Feng County:

“These acts of obstruction of justice and harassment of Chang’s family epitomizes how readily the Chinese government is to use its ‘Zero COVID’ personnel to join its expansive ‘stability maintenance’ apparatus to suppress human rights,” said William Nee.