Can Biden pivot to normalcy in the Middle East? 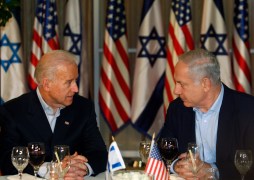 President Biden’s first trip to the Middle East has received criticism, especially for its presenting an apparent about-face regarding Saudi Arabia. Not long ago, Biden himself called the kingdom a “pariah.” How can the president now attend a major conference hosted by Saudi Arabia’s King Salman and his son, Crown Prince Mohammed bin Salman? Still, Saudi Arabia is unlikely to make major shifts in its human rights policies or make a dent in global oil prices. Is the United States simply reverting to its old ways of backing oppressive regimes in the hope that this might advance its interests?

Indeed, America has had a reverse-Goldilocks approach to its very presence in the region — at turns too hot or too cold, never just right. It leaves the United States ill-equipped to shape the geopolitics of a region that remains globally consequential, whether through positive U.S. engagement or through a credible threat of wholesale withdrawal. America’s partners are unmotivated to help the U.S. advance its interests, whether through carrots or sticks.

On human rights too, America has rhetorically supported a values-based approach while effecting little actual change, ultimately advancing neither U.S. interests nor values. Washington’s demands ring hollow, not because of presumed hypocrisy, but because it does not have leverage to support them. America is weary and wary of major efforts to shape the domestic affairs of Middle Eastern countries. Regional actors, friendly or otherwise, know this, and therefore discount America’s positions, taking offense to the rhetoric, but believing they can withstand the criticism. The opprobrium toward Saudi Arabia is a case in point. The Biden administration could have come down much harder on Saudi Arabia early in its term with clear goals in mind. Instead, the harsh rhetoric was not matched by a wider strategy, angering and insulting the Saudi rulers, but not effecting major change. (An important exception here, potentially, is the winding down of the war in Yemen, in which Saudi Arabia is one important actor).

Biden’s trip presents risks and may not have been the only way to advance his goals. And yet, if executed well, with proper follow-up, and with luck — all big “ifs” — the trip could contribute to a maturation of U.S. policy toward the Middle East. It could help define an endpoint for the lengthy process of rebalancing U.S. involvement in the Middle East.

What might such an endpoint look like? It would promote an approach that recognizes America’s still-formidable power in the region and couples it with agency and capacity by the major regional countries themselves. It would be an approach that rejects the notion that the U.S. is responsible for every facet of Middle Eastern affairs but does not discount the real leverage America still has in a region that needs the U.S. more than the U.S. needs it. It would lay the groundwork for a better relationship between America and the Middle East, one of respect but not coddling, tied to a global strategy and accounting for both interests and values. Articulating such a posture — not the soothing of Gulf rulers’ feelings or pleading for lower gas prices — is the real, heavy task Biden has set for himself by taking this trip.

The debate over Biden’s trip is the latest in a long tradition of pitting values vs. interests in Middle East policy. Since the so-called “pivot to Asia” began in 2011, it has taken the form of whether America should reassure its regional partners, who are perpetually in a state of needing reassurance that America is not in fact abandoning them. The pendulum of American policy toward the Middle East has indeed seen major swings since the end of the Cold War and especially since 9/11. The crippling hangover from the George W. Bush years led to the pivot, originally; the rebalance to Asia announced by the Obama administration. America, still in the throes of the war in Iraq and Afghanistan, needed to rebalance its portfolio toward the Asia-Pacific, the argument went.

The pivot worried Saudi Arabia, the United Arab Emirates, Israel, and other traditional American partners in the region. Suspicious of the Obama administration, with its tepid support for the Arab Spring and diplomatic efforts with Iran, they feared an America hoping to disengage from its partners.

Obama’s success at diverting U.S. attention elsewhere was limited at best. He ended up spending an inordinate amount of Washington’s most scarce resource — the time and attention of senior administration principals — on the civil war in Syria, the conflict in Libya, and two separate attempts to broker peace between Israelis and Palestinians.

Though the diametric opposite of Obama in nearly all ways, Trump was even more committed to turning the page on American military engagement abroad. Although his first foreign trip was to Saudi Arabia (and from there to Israel, the reverse of the Biden itinerary), and while he embraced regional regimes rhetorically, it was the Trump administration that set limited boundaries for U.S. military involvement. When American troops in the region were targeted, the U.S. reacted with force — including the killing of Iranian Quds Force commander Qasem Soleimani. Yet when major oil facilities in Abqaiq, Saudi Arabia were attacked and temporarily disabled by Iranian-backed forces in September 2019, no overt America response followed. America’s partners were shocked — they were alone, even after an attack against oil, supposedly America’s foremost regional interest.

Biden is the first president to have successfully pivoted from the Middle East in one important sense: The region has occupied far less of his schedule than those of his predecessors.

This is true despite some apparent continuities between Biden and Trump, on issues such as U.S. recognition of Jerusalem as Israel’s capital, Moroccan sovereignty over Western Sahara, or Israeli sovereignty over the Golan Heights. Biden has also largely stuck to the rule that the U.S. uses force only when Americans are targeted. The apparent continuity actually reflects the fact that Biden has operated within the tight constraints of very limited bandwidth. On some issues, continuities between Trump and Biden reflect that the latter has followed a path of least resistance (e.g. not rocking the boat on Western Sahara — neither reversing the Trump recognition, nor opening a U.S. consulate in the disputed territory as the Trump administration had promised).

This has allowed Biden to focus instead on specific prioritized policy changes. Most notably, the Biden administration has reengaged with Iran on a mutual return to the JCPOA; it has worked to wind down the disastrous war in Yemen; and it has, until now, turned a cold shoulder to Saudi Arabia. In recent months it has also devoted a great deal of effort on energy issues, from attempting to increase production in the Gulf to mediating the maritime boundary between Israel and Lebanon, where natural gas is abundant.

In some ways, then, the Biden administration is already treating the region as a more “normal” one for U.S. affairs. America is not actually disengaged from the Middle East. In no other region does involvement presume American troops fighting wars, or American ownership of every problem. America is the main external power in the Middle East and has an interest to remain so, especially in an era of great power competition. It has an interest to maintain its ability to intervene — and to deter by means of that capability — should it decide to do so.

America also has an interest in working on behalf of democracy and human rights everywhere. That can include fierce disagreements with partners in the Middle East, who often do not share America’s worldview. Cooperation in a mature regional posture would not entail endorsement of authoritarian regimes. The United States is not the patron of the Middle East, nor necessarily antagonistic to countries it disagrees with, even profoundly. America can chew gum and stand for its values at the same time. The U.S. president can even meet with dictators and make clear to them his stance on human rights, their feelings notwithstanding.

To thread the needle — to establish a more sustainable American posture — will also take a region able to manage its own affairs without constant recourse to the patron superpower. Washington must be able to work with and through partners in the region. In this context, the dramatic, though still nascent changes stemming from the Abraham Accords signed on Trump’s watch and continuing today offer an opportunity. It should not be missed by a Democratic president just because Trump was involved. It offers the potential for a new architecture, already operational in some ways, in which Israel and Arab countries cooperate on limited mutual defense. Biden is wise to work to enhance it, as part of a mature relationship between the U.S. and the Middle East.

Biden needs to start convincing the region and America that the U.S. can now treat the Middle East as an important if distant region, one in which it has partners that are not always soulmates. On this trip and going forward, he can start to define an endpoint for the pivot; a more “normal” regional policy, finally. It is a worthy aspiration, even if very hard to achieve.